We think Bob Briddick is a Quarterback of our SPRY Diner volunteers. Turns out the Houston Texans, the United Way of Greater Houston and BHP Billiton think so too. 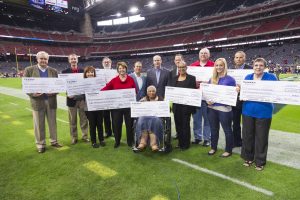 Here he is in the back row, third from the left.

Imagine how proud we were when Kandyace Mayberry with the Houston Texans contacted us with these words, “We… were very moved by the work that Robert has been doing for your organization.” She  was notifying us that Bob was one of ten finalists for the Community Quarterback Awards. With that comes a $5,000 award to the Montrose Center!

We offer our most sincere congratulations. Not just to Bob Briddick because he has been a stellar volunteer with our Montrose Diner, but also to the Houston Texans, United Way and BHP Billiton. When we submitted Bob’s name for consideration, we thought it was a long shot for these companies to select an openly-gay man, volunteering for an openly-LGBT program, at an openly-LGBT nonprofit organization.

Bob was recognized with the other finalists at the Texans game on December 21.

Sixty percent of LGBT Houstonians who are age 50+ are not partnered/married, and 72 percent have no living children as potential caregivers. These figures are local to the Houston area, which adds a dimension that spotlights how important Bob Briddick is to the work we do.

Bob is the lead volunteer of Montrose Diner, a free lunch program that not only provides a nutritious, hot meal but also has a social component that reduces isolation for LGBT seniors in Houston. Without the diner, many of our guests would be short on food, but perhaps more destructive, if not quite as quantifiable, is the social void it would leave.

“I find myself listening as much as talking. Often, I’m privy to innermost secrets and problems. One moment that especially touched my heart was the day a frequent guest was pouring out his heart to me. When I asked him why he was telling me these things, he looked at me with tears in his eyes and said, “You’re such a good listener.”

“It made me feel good to know that I had built such trust with this gentleman that I could be there to listen to something that he so clearly needed to get off his chest. That’s something the Diner provides that is arguably more important even than the food… The comradery, the socialization, the feeling almost of family.”

Bob serves approximately 90 meals a week, every Monday, Wednesday and Friday, and that number keeps growing. Lunch is served at noon, but the guests start arriving at 9 a.m. for the social interaction, and Bob is there to listen, play cards, laugh and provide referrals to those in need of additional services. He also arranges for speakers to come in to provide information and education to LGBT seniors. Most recently, a speaker was there to talk about Medicare Open Enrollment.

Once again, congratulations to Bob Briddick and the entities that saw the value of the work he does.

Special Notice Regarding COVID-19: Effective February 25, rental spaces in the Community Center will remain closed through May 2021. We’re hopeful for a reopening in June 2021!