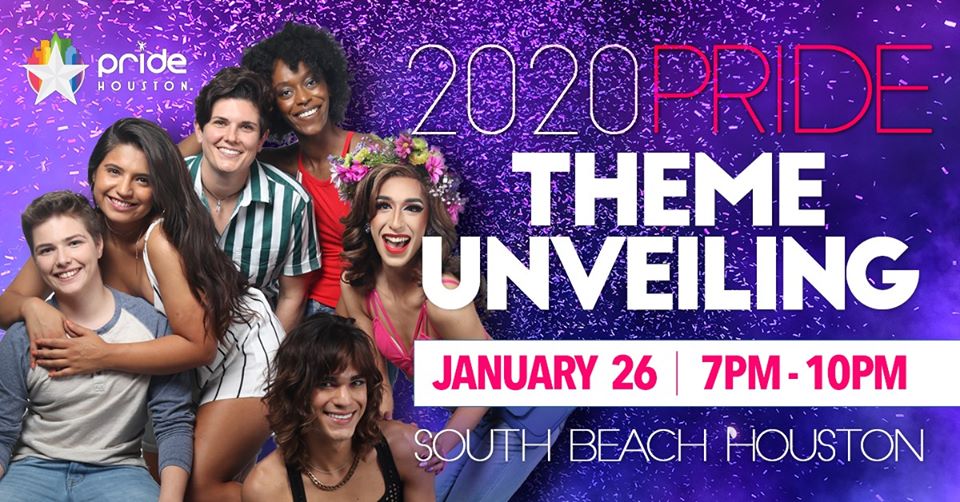 It’s almost time to unveil the theme for the 2020 Houston LGBT+ Pride Celebration! And you know Pride does everything with style. So join Pride at South Beach Houston for an evening of inspirational speakers, delicious food, and some fantastic surprises. You will also be treated to awesome entertainment and music! Make plans to grab your crew and come party with Pride!

*This event is free to attend and open to 21+

**Lesbians Over the Age of Fifty (L.O.A.F.)**
LOAF is Houston’s social networking group for lesbians who are 50 years of age and older. LOAF is celebrating its 32nd year anniversary. Arden Eversmeyer and five other founding mothers created LOAF as a safe haven for lesbians to have social interaction, which is so important to our mental and physical well-being. LOAF also provides a monthly newsletter that features an activity calendar and reprints of articles of interest to senior women. LOAF is open to women over 50 and their lesbian partners who are under age 50 are also eligible to join the group. For more info visit loafhouston.org

————————————————————————————-
ENTERTAINMENT
** DJ Mz Rico **
DJ Mz Rico’s first experience Doing came via tailgates and campus parties while attending the University of Houston and she used this experience to begin a professional career a few years later. She has entertained crowds at venues ranging from bars and night clubs to larger spaces such as Warehouse Live, Revention Center, and Stereo Live. She has continued to develop her craft and was selected as an Official SXSW Artist for the first time in 2016 and again in 2017. Both the Houston Chronicle & the Houston Press have covered Mz Rico for DJing at SXSW and JMBLYA festival. Brands such as Macy’s, Sephora, Google, JD Sports, Nordstrom, Saks Fifth Avenue, & Victoria’s Secret routinely partner with Mz Rico for their local events. These events range from fashion shows, in-store promotions, product launches, & employee appreciation parties. Recently in 2019, Mz Rico was selected as the official DJ for the Houston Dash soccer team.

**Michael Chiavone**
A master local entertainer born and raised in Houston, Texas, Michael got his first big break as so many young gay kids do: Directing, Producing, and Starring in a show he made up in his parents’ garage. From then on, he knew that the stage was the only place he wanted to be. Michael graduated from Klein High School is 2009 where he was an active member in theater and choir, participating in almost every production during his high school career in some shape or form. Michael studied Musical Theater at Oklahoma City University before returning home to pursue a career as an entertainer. In the last couple of years, Chiavone has worked to carve out his place in Houston nightlife, hosting karaoke and performing in clubs, hosting special events and even competing in contests which have earned him the titles of Mister Gay Houston America 2018, Mister Gay Lone Star America 2019, and most recently Mr. Gay TEXAS America 2020. Michael is so thrilled to be a part of this year’s pride festivities, in a city that means so much to him during his reign as Mister Texas and looks forward to performing and working for his community in the future.

Would you like your event to be shared on the Montrose Center’s LGBTQ Events Calendar? Submit your event here!

Submission Tip: Events that occur often most likely won’t be added to our calendar, but one-time fundraisers, art shows, concerts, celebrations and social events for the community most likely will!

We are now accepting  reservations for events to be held on or after July 1, 2021. Due to the severity of the spread of COVID-19 in Harris County, the Community Center is currently unavailable to outside organizations for reservations. Please contact Nova Jones (they/them) at lgbtqcenter@montrosecenter.org for further inquiries. Click here to learn more or get started.